Book Review | Kingdom of the Cursed

Do you love fantasy tropes? Do you love them a lot? Do you love them enough to read a book stitched together almost exclusively with every YA Fantasy-Romance trope that exists? If so, you won’t be able to help loving Kingdom of the Cursed. The second installment in the Kingdom of the Wicked series feels like a study in everything we love about YA Fantasy packed expertly into one extremely digestible volume. Kingdom of the Cursed feels familiar and comfortable, delivers all a reader could have wanted, and occasionally goes beyond to show its author’s genuine cleverness. 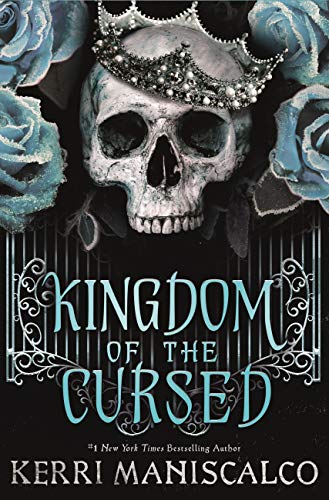 Find it on Storygraph

After selling her soul to become Queen of the Wicked, Emilia travels to the Seven Circles with the enigmatic Prince of Wrath, where she’s introduced to a seductive world of vice.

She vows to do whatever it takes to avenge her beloved sister, Vittoria… even if that means accepting the hand of the Prince of Pride, the king of demons.

The first rule in the court of the Wicked? Trust no one. With back-stabbing princes, luxurious palaces, mysterious party invitations, and conflicting clues about who really killed her twin, Emilia finds herself more alone than ever before. Can she even trust Wrath, her one-time ally in the mortal world… or is he keeping dangerous secrets about his true nature?=

This review has some spoilers, but none that really matter.

“Tell me,” he whispered, his voice sliding like silk over my flushed skin.

“What?” My own voice came out breathless.

“I am your favorite sin.”

It’s a classic they can’t have sex but very much want to situation.

It’s a classic they really really like each other but can’t admit it situation.

It’s a classic they’re stuck in close quarters in the cold in an igloo with one room where they can’t wear clothes and must share body heat situation.

It’s a classic we’re engaged but just for convenience but also secretly like it situation.

It’s a classic let’s look intimidating and evil together in front of my court, Rhysand-Feyre style situation.

I could go on. You get the idea.

The two leads execute this hot-and-bothered dance extremely well, but for one strange scene that involves Wrath using his powers upon Emilia. He’s training her for the ball (a feast, but, well, good enough—there are masks and everything, we can check off this trope too) when his princely brothers will try to use their powers upon Emilia for their own amusement. This, however, is explained after the incident.

The incident involves Wrath essentially removing Emilia’s free will. This is near to the first time when Wrath does something objectively wrong—something that couldn’t be defended, say, by a dual-POV or a miscommunication.

Which is okay. Wrath is a demon prince. He’s not all good. And in this, he makes a big mistake. This injects some real growth into Wrath’s character, which is otherwise just a) hot b) whipped for Emilia and c) convienetly cursed to the point where he is unable to provide Emilia with any kind of helpful information.

Despite Wrath’s unhelpfulness—and the general unhelpfulness of literally everyone she comes across—Emilia unravels the mystery of the Kingdom of the Wicked with admirable agency. Constantly scheming, constantly testing the same ideas the reader is considering, Emilia makes mostly smart choices and never lets the plot get ahead of her. This fact–and the grounding of Emilia’s character in the murder of her twin in book one—keeps her immanently likeable and kind of awesome.

CHEKOV IS TAPPING HIS FOOT

Maniscalco is taking her reveals and tossing them as far into the future as she can.

Which means that the final installment of the series is going to be absolutely wild, and that, conversely, Kingdom of the Cursed feels like a bridge. A flat bridge, slightly unimpressive, that soars above all the interesting stuff really going on below. The reader can see the general outline of what it’s going to look like, way down there below the bridge, but is not allowed to see it in full or really engage with it at all.

Overall, this is a solid, incredibly readable piece of NA Fantasy.

It has delicious tropes and Many Hot People. It is well-written. It includes some lovely descriptions of dresses and palaces and food and snowy vistas. But it also lacks anything particularly stunning and original that would have me raving.

What did you think of the sequel to Kingdom of the Wicked? Let me know!

View all posts by ejwbooks

I can’t get into Children of Blood and Bone…I think I just need a change of genre for a bit. Any suggestions? (I’m waiting my read Babel so I can read it with my friends 🥰)
its cuffing season
British Museum, London
The holy trinity imo
being excited for something tomorrow before you go to sleep >>
“by S. Morgenstern, chapter one.”